Is Your Influence Quotient Working For or Against Your Leadership (The Five Levels of Influence, Pt. 1)

Colin O’Brady is trying to cross the Antarctic alone. You can read about this attempt in Hilary Brueck’s Business Insider article. To put the trek in perspective Brueck posted this map. 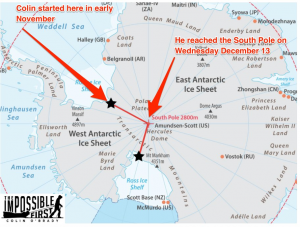 I’m not sure how far away Colin is from another human being, but based on the map, I’d say he’s got plenty of openings on his social calendar. His trek –  and the points on that map – got me thinking about a question.

At any given point in my life, how far (geographically) have I been from all other human beings?

How about you? Do you think you’ve been one, or ten, or a hundred miles from the next closest human? I suppose it could be hard to know the exact distance, but it’s kind of an intriguing idea to ponder.

Another thought-provoking idea about the distance between people is this: It’s amazing Just how far away one can be from people even when sitting right next to them. Take leaders, for example. I’ve sat with a fair number of leaders who were in very close proximity to their teams, but might as well have been skiing the Antarctic with Colin. They were talking, but no one was listening.

There could be a hundred reasons for the distance between a leader and her team. But low-influence is right at the top of the list. When low-influence leaders try to engage others in important work, they are thwarted by a self-created distance. This distance is often due to a consistent pattern of relational missteps — between leader and team. These missteps lower the credibility of the leader and the desire of the team to join her in any significant way.

Of course, the opposite is also true. A high-influence leader enjoys relational and strategic capital that she can spend in the pursuit of the mission. When influence is high, people are energized and inspired to link their efforts (and lives) to the invitation of the leader.

Influence is both an important and well-trodden leadership quality. Plenty of thinkers, writers, and leaders have extolled its virtue and necessity. But what exactly is influence? What is this quality that eliminates distance and energizes collective action and ingenuity? For all the talk about its importance, it’s interesting how little I find leaders can articulate what influence is or how to practice it. In subsequent articles in this series, we’ll explore the five levels of influence and how to deploy them in your everyday execution as a leader.

For now, run this experiment and observe what happens.

Over the next week or so, pay attention to how you try to influence people in your interactions. Try and describe your influence tactics or approach. Give those tactics or that approach a name. Notice if your attempts work. If they do, think about why they worked. If they don’t work, ponder what went wrong or why your influence seemed low. Notice if people are drawn into your influence or are they just complying because they “have to.” Then try the opposite. Notice how people try and influence you. Ponder their attempts at influence and see what you can learn.

Oh, and here’s a peek at what’s ahead. We’ll explore the meaning and application of each level in future articles.

The Five Levels of Influence

Sign up to download Section One of Dave Fleming’s book, Tribal Alchemy: Mining Your Team’s Collective Ingenuity. You will also receive a weekly newsletter with tips for infusing ingenuity into your work.
Written by Dave Fleming